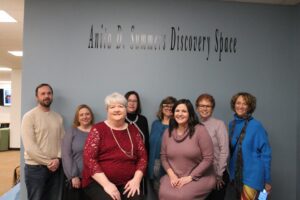 On Friday, January 14, the Gilmer County Library, a branch of the Sequoyah Regional Library System (SRLS), revealed the name for its 8,000 square foot basement programming area: the Anita D. Summers Discovery Space, in dedication of the library system’s Executive Director, Mrs. Anita D. Summers, who will be retiring on February 1, 2022. The announcement was unveiled at a public retirement celebration held for Mrs. Summers at the Gilmer County Library. Local officials including GA State House Representative Charlice Byrd and Cherokee County Board of Commissioners Chairman Harry Johnston were present for the event.

The newly-renovated Gilmer County Library basement area was officially unveiled on September 17, 2019 as an educational space for hosting library programming, exhibits, meetings, and equipment for the Gilmer County community. It has been named the Anita D. Summers Discovery Space in honor of Mrs. Summers’ 32 years of service and her dedication to the library’s vision of community growth and discovery.

Ms. Summers joined the staff of SRLS in July 1989 as Branch Manager of the Gilmer County Library in Ellijay. She was named Assistant Director of the library system in 2008, and was chosen by the SRLS Board of Trustees as Executive Director in 2014. Angela Cortellino, who currently serves as Deputy Director of the Sequoyah Regional Library System, has been formally selected as the next SRLS Executive Director following a search process conducted by the personnel committee of the Board of Trustees. Ms. Cortellino will officially step into the Executive Director position on February 1, following the retirement of Anita Summers.